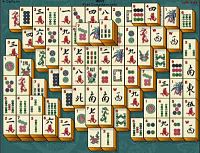 Mahjong, a game that originated in China,  is commonly played by four players. The game and its regional variants is widely played throughout Eastern and South Eastern Asia and has a small following in Western countries. Similar to the Western card game rummy, mahjong is a game of skill, strategy and calculation and involves a certain degree of chance.  The game is played with a set of 144 tiles based on Chinese characters and symbols.

The BVU3A Mahjong group has been ongoing for many years. It provides a social gathering for members as well as an opportunity to learn new skills and practise new strategies.